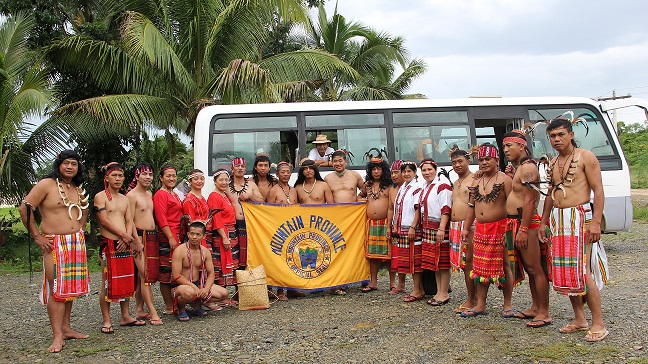 Women in their neatly wrapped tapis and heirloom beads worn on their heads, arms and hands stretched with confidence and elegance as they instinctively follow each other’s foot step with every beat of the gangsa or solibao dance gracefully. In the same fashion, bare chested men who wore only G-string (wanes) proudly hold their gong and beat it as they move with its rhythm. They dance the cultural dances of Mountain Province. They dance the takik and tuppaya of the western, the courtship dance (bogbogie) and Bontoc Pattong, and the eagle dance of the eastern.

It is very common to see a group of dancers perform various dances in gatherings. What is rare though is to see a group of government employees who despite their eight –hour work and spending quality time with their families still find time to dance. It has never been a burden to them when they practice and when they perform in parties, gatherings, festivals and even invitations despite being busy as public servants, and busy doing their personal responsibilities. Maybe this is one of the reasons why they always have the spotlight every time they perform. These women and men who never fail to entertain us are the Mountain Province Provincial Employees Performing Arts Group.

Just like every group, Mountain Province Provincial Employees Performing Arts Group has a story to tell, on how the group was born. In the past years, it has been a challenged to the Provincial government, to encourage and gather interested employees to perform and showcase ethnic dances of the province during provincial gatherings or occasions. To solve this, Provincial Human Resource Management Officer Leonila Milagrose F. Malla-ao thought of organizing a group. A group where members are employees of the provincial government; members who can commit and spare some of their time for practices and performances in every provincial gathering. This idea was supported by Congressman Maximo B. Dalog who was then the governor. The group elected Ms. Malla-ao as the President and Supervising Administrative Officer Carmencita W. Magalong as the secretary.

In 2009, in a meeting for the preparation of the Founding Anniversary and Lang-ay Festival of Mountain Province, Ms. Malla-ao posed a challenged to Mr. Ventura C. Bitot to train employees for theatre performances considering that there are those gifted with artistic talents. Mr. Bitot, a director and composer accepted the challenge, thus, an invitation was opened, wherein more or less 38 employees responded to the call. Mr. Roy Camiding and Mr. Gary Donggayao were tapped to help train the dance group as well. During their training, the group learned the importance of patience, sacrifice and hard work.

Everything has paid off during their very first performance on October 1, 2009. The group wowed their audience in their stage theatre play for a cause production, “Sinauliyan.” The love story of Bangan and Gatan amidst tribal wars. Proceeds of the activity were used to purchase two wheel chairs for the needy children of Bontoc and the remaining amount was donated to Mountain Province-Special Education Center (MP-SPED).

Not wanting to waste the efforts and the eagerness of the recent success, the group continued to perform in gatherings, occasions, festivals and even invitations outside the province. On November 28, 2009, the group performed in Baguio City representing Mountain Province in the WOW Philippines, Cordillera’s Best 2009. They also danced their way to the Baguio Centennial Festival- Cordillera Theatrical Cultural Performance Competition which they emerged a winner. The group even supplemented the composition of the Tadian contingent as the entry of Mountain Province to the Grand Parade of Cordillera Festivals Competition on November 29, 2009 coming home victorious. The joint-group grabbed the Best Performing Group, bringing home a cash prize of P50, 000.00. With numerous performances, the group never gets tired. The group was making name not just to the locals, but to the Cordillerans living and working abroad. They were invited to perform in Bangkok, Thailand during the Festival of the Association of Cordillerans in Thailand on March 16-25, 2011.

However, the members of the group petered out as some of them were contractual employees, the demands for rehearsal was taking its tool and for others, the activities were physically taxing.

Yet, dancing to them started like an itch that needs to be scratched. So once again, the Mountain Province Provincial Employees Performing Arts Group was revived in 2014. Now, projecting authentic execution of ethnic dances of Mountain Province and they do not have plans to perform theatre productions for now. The dance group now with 16 males and six females gained back the spotlight they once have.

They have again showed off their dancing skills when they wowed the audience and received a standing ovation when they were invited to perform before 500 members and pensioners of the General Services Insurance System (GSIS) during a Stakeholders’ Dialogue in Baguio City sometime this year. The President and General Manager of the GSIS, Robert Vergara requested the group to perform when he saw the video of the group’s performance during a provincial occasion. They danced their way to Apayao Province during the 28th Cordillera Day Celebration representing Mountain Province. The lists go on.

The secret of the group in staying together is their commitment and dedication to what they do. They do not perform for their own profit. They believe in entertainment without pressures, without fees and without expecting a reward in return. They simply just love to dance and perform.