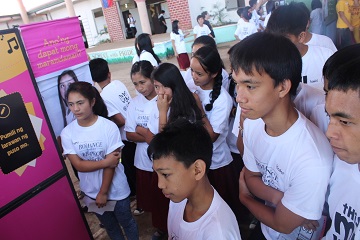 Marites Agageo of the Provincial Population Office explained that 101 ways to become empowered youth and ‘x’ the early sex (101XSX) is the main campaign slogan of the Population Commission (PopCom) that aims to create a movement of youth that gives their commitments to become better citizens and ultimately divert their time in recreational activities, and draw focus away from early sexual engagement.

101 also stands for “1 on 1 interaction”, whether it be online or personal interaction, the goal is to create a productive relationship between the youth, between young males and females, and even between youth and adults. The campaign aims to break the boundary of secrecy and embarrassment of discussing sexuality and health.

Agageo said that the activity aims to train teen facilitators on key facilitation skills and Adolescent Reproductive Health (ARH) concepts and issues, create a core group of teen facilitators that can be tapped if needed to implement other teen trails in the area or train other aspiring facilitators, and create a trail to reach the critical mass of teens who will demand better services of Filipino youth.

She elaborated that at least 110 Grades 9 and 10 students in three public high schools in the province were trained to be teen facilitators in different venues and dates last week of July. This includes 40 in Guinzadan National High School (NHS) in Bauko, 30 in Kadaclan NHS in Barlig, and 30 in Saliok NHS in Paracelis. The participants were trained by facilitators from the PopCom-Regional Office.

The trained teen facilitators were tapped to facilitate the Teen Trail activity in their respective schools in different venues and dates participated by 390 students. This includes 170 students in Guinzadan NHS, 110 in Kadaclan NHS, and 110 in Saliok NHS.
The trained teen facilitators initiated the group discussion participants about sexuality, changes in the human anatomy of males and female, and fertilization and gender –based violence. The participants were also assisted by the teen facilitators to calculate their Body Mass Index (BMI) and encouraged them to eat nutritious food.

Apart from these, teen chat or Structured Learning Exercises such as graffiti, factor or bluff, and the ABCDE of preventing pregnancy were conducted. The ABCDE stands for Abstain, Be faithful, Condom use, Do not drink, smoke and use drugs, and Educate Yourself.

Also, film viewing of an animated story about child trafficking, fun games and teen tunes were incorporated in the activity. Under the teen tunes, the facilitator played the role of a videoke host, sung a song and encouraged the participants to also sing in front of the audience. The songs tell stories of typical teenage romance.

The activity was spearheaded by the Provincial Government of Mountain Province through its Provincial Population Office in partnership with the PopCom- Regional Office. // By Alpine L. Killa