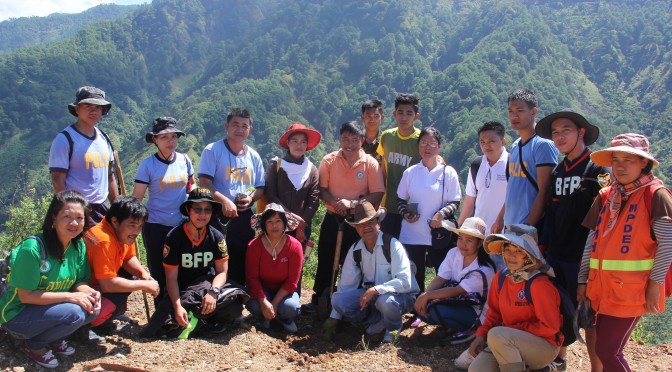 It was earlier agreed by the Provincial Disaster Risk Reduction and Management Council (PDRRMC) chaired by Governor Leonard G. Mayaen to conduct the tree planting at the mountain above Sitios Khefa and Pawek in Barangay Samoki, Bontoc. The Mines and Geosciences Bureau – Cordillera Administrative Region (MGB- CAR) earlier declared the area as a “danger zone” because of active rock fall, and that possible widening of cracks in the mountainside may trigger landslide.

However, tengaw (agricultural ritual holiday) was declared in Barangay Samoki, on the scheduled day of the tree-planting activity so the group was not allowed to enter the community. Because of this, the tree planting was conducted in Balitian.

Officer in Charge of the Provincial Disaster Risk Reduction and Management Office (PDRRMO) Anacleto B. Tangilag said that pine trees are generally tough plants, and are suitable for erosion control, with its roots holding soil in place and layers of pine needles helping to soften the impact of falling rain. With trees planted, erosion is prevented.

Aside from this, the PDRRMO in coordination with the Bureau of Fire Protection (BFP) and barangay officials of Antadao, Sagada planted 500 pine tree seedlings in Upper Pegeo, Sitio Bakan in Barangay Antadao. Barangay Antadao was among the identified hazard areas in Mountain Province due to the rapid movement of soil underground. Relative to this, a Deep-seated Catastrophic Lanslide (DEWS-L) was earlier installed in Barangay Antadao by a team from the Philippine Institute of Volcanology and Seismology (PHIVOLCS) and University of the Philippines, Diliman (UPD) in partnership with the Department of Science and Technology (DOST). The landslide monitoring system can accurately and cost-effectively monitor slopes with series of sensors that measure soil moisture and slope movements. // By Laycha K. Marra