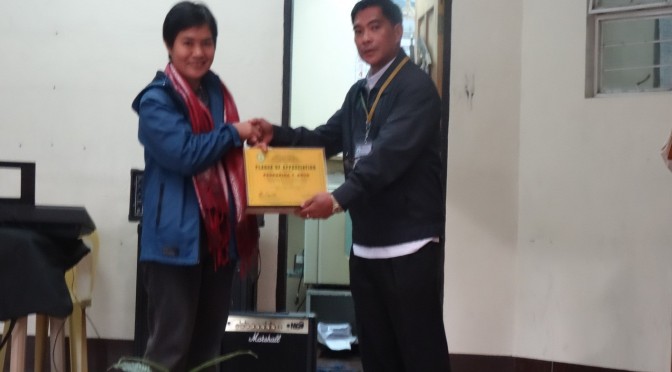 BONTOC -Doing service without expecting anything in return is the very essence and intrinsic meaning of volunteerism.

Relative to this, the Provincial Government of Mountain Province awarded a Certificate of Appreciation to the Arud sisters for their voluntary services in assisting needy but deserving students in their municipality.

In a letter to Governor Leonard G. Mayaen, Agustin B. Balilis and his wife Gertrude requested that the Arud sisters be given recognition by the provincial government for doing a civic obligation with them for four years without any compensation.

Balislis relayed that he and his wife came up with the “Agustin- Gertrude Student Assistance (AGSA) Program in 2008 after spending their vacation in Barlig and learned that there are children graduating from elementary who do not continue their studies for various reasons. He added that the Arud sister did not hesitate to help them in the implementation of the program especially that the former and his wife went back to San Diego, California where they lived since year 2000 t0n 2013.  He narrated that it was the Arud sister who worked on the selection and communication with the beneficiaries and their families. Selection of beneficiaries includes the orphaned due to death of parent, size of family and poorest of the poor. Also, the Arud sister were able to hold the secrecy of the program that donors must never be known by the students, students must never be known by the donors and the identity of the donors will be revealed when the students graduated in  high school.

The years of hard work and perseverance of the Arud sister paid off when the beneficiaries Rocelia Kinorman of Barangay Latang, Barlig, Dante Senagon of Lunas and Feverson Wandag of Silangan graduated in high school in 2012 thru the AGSA Program. As benefactors of the program, Balilis and her wife are happy that the beneficiaries were challenged to do their best in school especially that Kinorman graduated as salutatorian in Barlig National High School and Wandag graduated with honors in Lias National High School.

Balilis believed that the success of the program and the achievement of the beneficiaries was not only because of the educational assistance he and his wife has given, but to the well- managed implementation of this by the Arud sister.

The said awarding was witnessed by the employees of the provincial government and national government agencies at the Provincial Capitol on January 12, 2015.