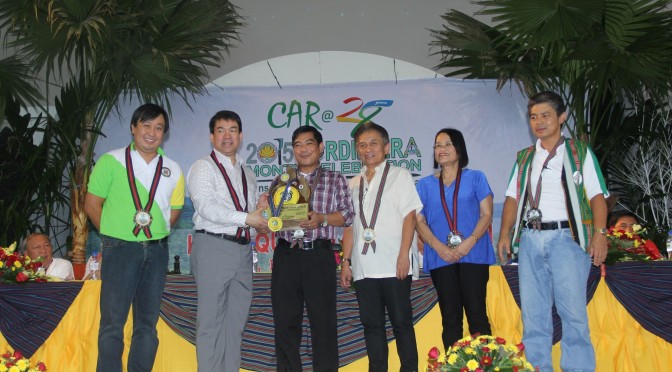 The award was initiated by the RDC-CAR last year to serve as the mechanism that recognizes the valuable contributions of Local Government Units (LGUs) in attaining economic prosperity, social well-being, and environmental integrity in the region. It also steers better appreciation and active involvement of all LGUs in the Cordillera in RDC programs and activities, to work together for regional autonomy.

The award was given during the culmination program of the 28th Founding Anniversary of CAR in Luna, Apayao on July 15, 2015.

The winners of the award were judged through the following criteria: first, the LGU’s performance on aspects of good governance with a total of 50 points; second, the LGU’s support to RDC initiatives and advocacies on regional development and autonomy with 40 points; and third, its participation in RDC-led activities with 10 points.

The first criteria includes a major assessment of line agencies on the qualification of the LGUs in the Seal of Good Local Governance of the Department of Interior and Local Government (DILG), compliance with the Anti-Red Tape Act of the Civil Service Commission (CSC), Public Financial Management assessment by the Department of Budget and Management (DBM), and the monitoring and evaluation of local plans in the implementation of nutrition program management of the National Nutrition Council.

Provincial Administrator Johnny V. Lausan who represented Governor Leonard G. Mayaen said that the award proves that Mountain Province can compete with our neighboring provinces and cities in the Cordillera in terms of good governance while also focusing on development of not just the province, but the Cordillera as whole as shown in our support to regional autonomy. // By Erwin S. Batnag