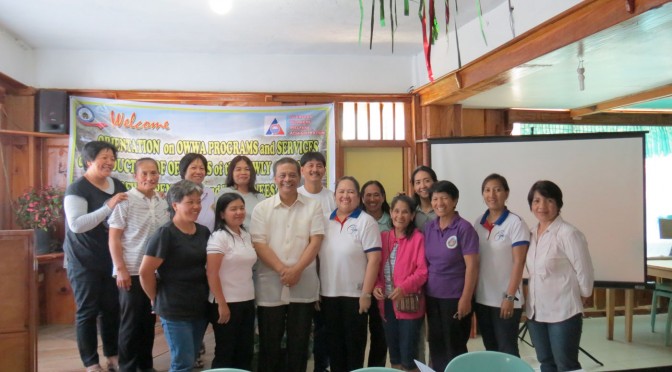 BONTOC – The Provincial Government of Mountain Province continues to assist individuals who want to work abroad but lack the financial means to pay their placement fees.

According to Laire B. Ligligen of the Office of the Governor, a total of 185 overseas workers from Mountain Province benefitted from the Provincial Overseas Filipino Worker (OFW) Loan Assistance Program since its inception in 2011.

Out of the total number, 80 work in Hongkong; 22 in Taiwan; 17 in Saudi Arabia; 10 in Cyprus; seven in Dubai; six in Malaysia; five in Canada; four each in Kuwait, Israel and Libya;  three each in Korea, Singapore and New Zealand; two each in Russia, Poland, Japan and Florida, USA and one each in Hawai, Europe and Germany.  The beneficiaries work as domestic helpers, factory workers and as nurses.

Accordingly, the Provincial Government is always willing to lend money to applicants who can satisfy documentary requirements.  The OFW Loan Assistance Program is loaned out with a minimal interest of five percent per annum and is payable in 12 monthly instalments starting a month after the overseas worker’ arrival at the country destination. A three percent service fee is also deducted immediately from the loaned amount.

The provincial government has initially allocated Four million pesos for the implementation of the program which was loaned out to the first batch of beneficiaries. The payment of the borrowers was consequently loaned-out to other beneficiaries. To date, the available loanable amount is P2.44 million.

Moreover, the program caters to those residing in Mountain Province and who are seeking employment abroad or already has a valid work contract and visa to any country of their destination.

To ensure the effective implementation of the program, applicants must have at least two qualified co-makers who are permanent employees of the Provincial Government of Mountain Province. They will enter into a Memorandum of Agreement (MOA) with the provincial government represented by the governor.

Under the MOA, the co-makers act as guarantors of the borrower for the payment of the loan and shall agree that the obligation be deducted from their monthly salary for a period of 12 months or until the loan shall have been fully paid if the borrower fails to pay his/ her monthly obligation.

The program was initiated by Governor Leonard G. Mayaen when he assumed office in 2011 believing that the program would ease the financial burden of the Overseas OFWs from the province.  The program is meant to address financial encumbrance of OFWs because of the very minimal loan interest instead of them availing loan from agencies charging very high interests.