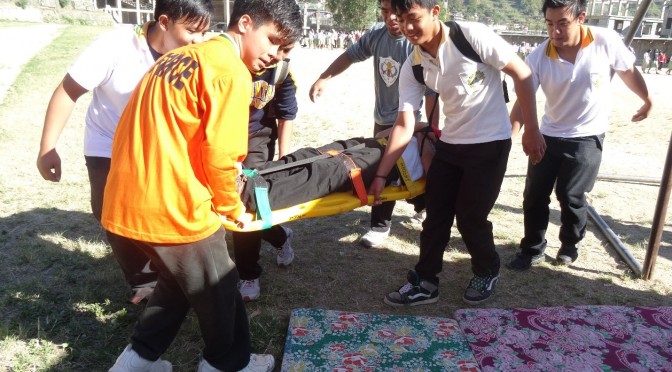 BONTOC – To familiarize the students with knowledge and necessary skills on earthquake preparedness and instilling proper evacuation procedures in times of emergencies, an earthquake drill was conducted at the Mountain Province General Comprehensive High School (MPGCHS) here on November 25, 2014.

According to Provincial Disaster Risk Reduction and Management Officer Anacleto B. Tangilag, more than 1,000 students and faculty of MPGCHS participated in the activity.

This includes the execution of the six steps necessary to do during earthquake. First is the alarm which is a pre-arranged signal such as siren or bell to indicate earthquake or ground shaking.  Second is the response. While the siren or bell is ongoing, everyone should move away from windows, glass or lights. It is also in this phase that everyone should perform the “duck, cover and hold” under desks, tables or chairs and remain in this position until the ground shaking stops.  Third is the evacuation phase. In this phase, once the shaking stops, teachers and students should evacuate the school building and proceed using pre-determined routes to go to identified evacuation areas. Fourth is the assembly in which at the designated evacuation area, students must be grouped together according to the class where they belong. Fifth is the head count. The teachers should check and make sure all students are accounted for. The sixth phase is the evaluation in which problems encountered during the earthquake and how this can be corrected in future occurrence of earthquake.

In line with this, the students and faculty performed scenarios that occur during earthquake and executed the six steps that everyone should follow in the occurrence of said disaster. Further, trained health scouts of the school provided first-aid to victims while trained Emergency Response Team comprising students were alert in attending to the victims.

Meanwhile, FO3 Charles Golocan of the BFP – Provincial Office, P/S Insp. Richard Soliven, the Chief of Police of Bontoc MPS and PDRRM Officer Anacleto B. Tangilag shared their assessment on the execution of the earthquake drill.

The officials also commended the school faculty for initiating the said activity stressing that this is helpful to the students and faculty to be always prepared to especially that earthquake occurs without warning.