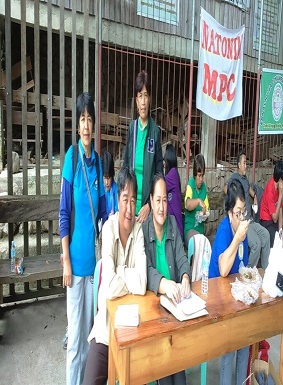 In this year’s celebration, both the government and the private sector planned, prepared, and undertook the plotted actions leading to the successful conduct of the celebration.

On their respective parts, the Office of the Provincial Governor, the Office of the Chairman of the Committee on Cooperatives of the Sangguniang Panlalawigan, and the Office of the Municipal Mayor of Barlig contributed substantive amounts to defray the necessary expenses. Further, the Barlig- LGU actively collaborated in the successful hosting of this event.

Barlig Mayor Clark C. Ngaya, in his opening remarks, warmly welcomed the participants. The representative of the congressman that of the governor, and Board Member Steven Afuyog, as Chairman of the Committee on Cooperatives of the Sangguniang Panlalawigan took turns in delivering their respective messages all converging to stress the role and significance of cooperatives in the community.

Resounding at the course of the program was the sharing on the experiences of ADTEMPCO by the guest speaker. She narrated the humble beginnings of ADTEMPCO. From a church-based cooperative with less than a hundred members and a small capital, it undertook decisive actions that set its direction for growth. She also expounded on the idea of the cooperatives diversifying their products and services.

The event’s guest speaker is the Chief Executive Officer of the ADTEMPCO-the Abra Diocesan Teachers Employees Multi-Purpose Cooperative. She is also the Chairperson of Nueva Segovia Consortium of Cooperatives in Vigan, Ilocos Sur. Irene B. Bringas is regarded as one of the most active and prolific cooperative leaders in the Cordillera region. An engineer by profession, she chose to be with her chosen cooperative. With her supervision and direction, ADTEMPCO grew to become a large cooperative meaning having an asset of more than eighty five million pesos. At the moment, the worth of the cooperative’s current asset is scaling closer to one billion pesos. From a single economic enterprise, ADTEMPCO broadened its business ventures. Aside from its credit and savings services, it ventured into other services and products that include coop mart, meat shop, hostel, ATM, laundry, hardware, Western Union, and Petron Gas refilling station, among others. Eventually, it expanded into additional economic units. These branches can be found in the municipalities of Bangued, Lagangilang, Manabo, and Sallapadan in the province of Abra; Manaoag, Urdaneta City and San Carlos City in Pangasinan; San Fernando City in La Union; and in Baguio City. With her strength, wisdom, and perseverance, she steered her chosen cooperative to greater heights.
Towards the end of the program, an open forum ensued during which Reverend Pablo Buyagan, in his capacity as a member of the Board of Directors of Mountain Province Cooperative Union, presented an “Unnumbered Resolution requesting the Honorable Legislators both in the House of Senate and the House of Representatives to reconsider their stand in lifting section 60 and 61 of Republic Act 9520 and spare the cooperatives from being taxed.”

Under section 60 and 61 of Republic Act 9520 otherwise known as “The Philippine Cooperative Code of 2008,” the cooperatives are tax-exempt. Recently, a bill was filed in the House of Representatives entitled – “Rationalization of Fiscal Investment Incentive”- seeking to lift section 60 and 61 of Republic Act 9520, in effect, removing the tax-exemption of cooperatives.

In that abovementioned Resolution, it was contended that cooperatives are already taxed under the single tax principle and that they are social enterprises. Thus, it has been resolved that the House of Senate and the House of Representative be requested, by the cooperators and the public whose names and signatures therein below listed, to reconsider their stand and spare the cooperatives from being taxed.

After the content of said Resolution was presented and explained, the participants voluntarily lined to scribble their names and to affix their signatures thereon.

As far as the province is concerned, as detailed in an update-write up furnished by the Cooperative Development Authority-Mountain Province Field Office, there are 49 registered cooperatives that are currently operating. However as of September this year, three cooperatives ceased in their respective operations. One in Bauko and two in Bontoc.