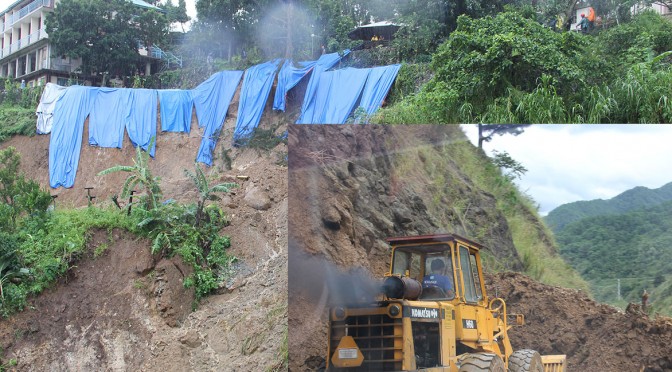 Typhoon Ineng left four people dead and considerable destruction on infrastructure, agriculture, schools, government buildings and other structures that include private properties in the province.

Under Republic Act number 10121, Section 3, known as “Philippine Disaster Risk Reduction and Management Act of 2010,” it defines State of Calamity as “a condition involving mass casualty and/or major damages to property, disruption of means of livelihoods, roads and normal way of life of people in the affected areas as a result of the occurrence of natural or human-induced hazard.

In areas declared under this, the five percent (5%) Local Calamity fund also known as the Local Disaster Risk Reduction and Management Fund (LDRRMF) shall be utilized for emergency operations. Of the amount appropriated for the calamity fund, thirty percent (30%) shall be allocated as Quick Response Fund (QRF) or stand-by fund for relief and recovery programs in order that situation and living conditions of people in communities or areas stricken by disasters, calamities, epidemics, or complex emergencies, may be normalized as quickly as possible. This fund, according to Gov. Mayaen, can only be legally used if the province is in a state of calamity.

With the province under state of calamity, Mayaen said that this will mitigate the suffering of the victims, facilitate restoration of basic services outfits destroyed by the typhoon and hasten the delivery of assistance to affected constituents.

The PDRRM Office recorded four deaths as of August 26, 2015. These include 11-year old Ykir John Lee Mayon who died when their house was covered by mudslide in Namatec, Sabangan at 4 O’clock in the morning of August 21, 2015. The body of Julius Bagni Gomisa alias Kaisu of Mabongtot, Lubugan, Kalinga who was drowned along the Chico River at 11:15 in the morning on August 22, 2015 was reportedly found at Suyang, Tabuk City. His remains was brought to Funeraria Carbonnel in San Juan, Tabuk City. The body of Ricardo Allaking Gadangen, 56-year old, and a resident of Omfeg, Barangay Bontoc Ili was found after he was buried by mudslide at Sitio Silin going towards Barangay Tocucan, Bontoc. Also, Neil Kayangeo’s body that was reported missing after he was drowned along the Chico River was found along the Cagayan River yesterday.

Around 60 million worth of agricultural damages, 1.8 million on water system and around 40 million to infrastructure has been initially reported by the PDRRMO. It is expected that these figures will increase as reports from different municipalities are still to come.//Laycha K. Marra