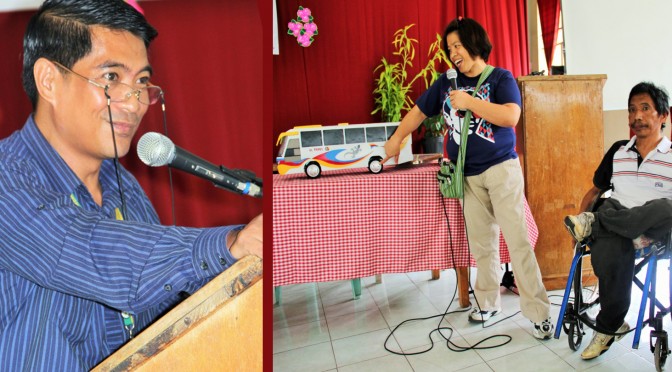 BONTOC – People with disabilities (PWDs) and children with special needs should be treated with utmost respect and deep understanding at all times.

This was highlighted during the culminating program in observance of the 36th National Disability Prevention and Rehabilitation (NDPR) Week with the theme “Talino at Paninidigan ng Taong may Kapansanan Pasaporte sa Kaunlaran” on August 1-2, 2014 at the Multi-Purpose building here.

In lieu of Governor Leonard G. Mayaen, Provincial Administrator Johny V. Lausan in his message to the PWDs stressed their significance who have equal rights and opportunities.

With this, Lausan enumerated the Top 10 extra-ordinary people with disabilities who excel in different profession and have inspired fellow PWDs to succeed in their endeavours in life.

These include Sudha Chandran who became one of the most accomplished and acclaimed dancer of the Indian Subcontinent despite having an artificial right leg; Marla Runyan who became the first legally blind paralympian to compete in the Olympic games; Vincent Van Gogh who was recorded as one of the greatest painters in the world despite his mental illness; Ludwig van Beethoven who was regarded as one of the greatest composer despite being deaf; Mexican painter Frida Kahlo who contracted Polio but did not stop her to create striking paintings that were purchased by an international museum; well-known Irish author, painter and poet Christy Brown who had severe cerebral palsy; Noble laureate American mathematician John Forbes who was diagnosed with Schizophrenia; French journalist, author and editor of the French fashion magazine ELLE Jean –Do who was paralyzed from head to toe and was able to move only his left eyelid; British theoretical physicist  Stephen William Hawking who has Motor Neuron disease and American author, political activist and lecturer Helen Adams who was the first deaf-blind person to earn a Bachelor of Arts degree.

Lausan also enumerated Filipino revolutionary leader Apolinario Mabini who had paraplegia (paralysis of the legs) but inspired the Filipino people to fight against the abuses of the Spaniards.

Relative to this, Lausan said that PWDs are not different from the normal people because God has gifted everyone with unique talent and ability.

He added that the government has also been very supportive in the right and privileges of the PWDs such as the implementation of the 20% discounts from purchased of commodities,  purchase of  medicines, medical and dental services in private and public hospitals and in transportation.

Lausan stressed that the provincial government of Mountain Province through its Provincial Social Welfare and Development Office (PSWDO) continuously supports the PWDs to promote and advocate their capabilities, skills and talents as a means of improving their lives and economic status.

Among the programs and activities funded by the provincial government is the annual celebration of NDPR week, forum on the Magna Carta of PWDs, regular consultation to Provincial Federation of PWDs, PWDs enhancement activities and physical restoration service.

Moreover, the livelihood products of the PWDs were displayed at the frontage of the Multi-Purpose building during the two-days culminating activity. 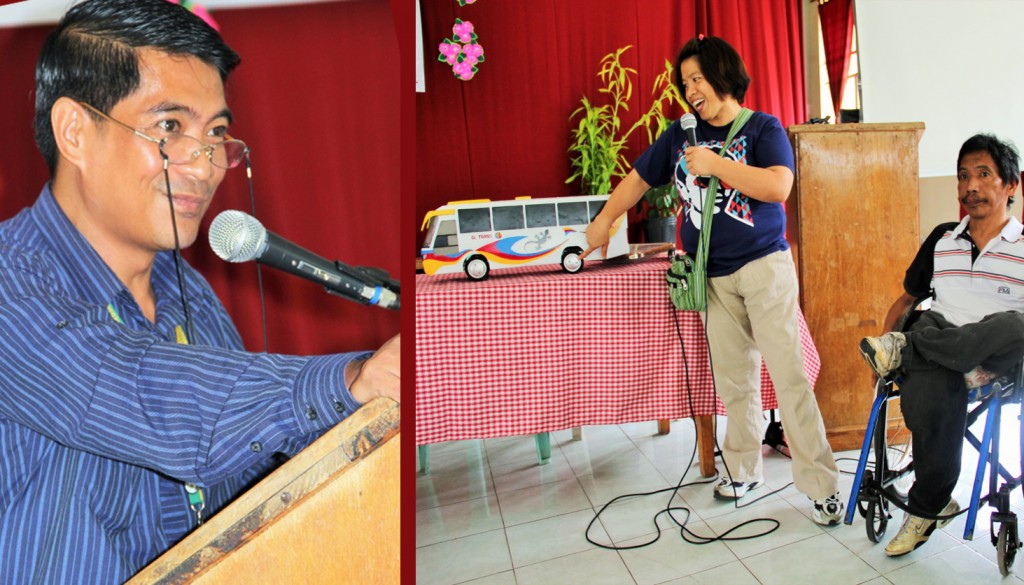 (Left to Right Photo) Person with disabilities (PWDs) from Bontoc presented their products made from recycled materials while Provincial Administrator Johny V. Lausan stressed that PWDs have skills and abilities like the normal people during the culminating activity of the 36th National Disability Prevention and Rehabilitation (NDPR) Week on August 1-2, 2014 at the Multi-purpose building, Bontoc, Mountain Province. Photo by Alpine L.Killa