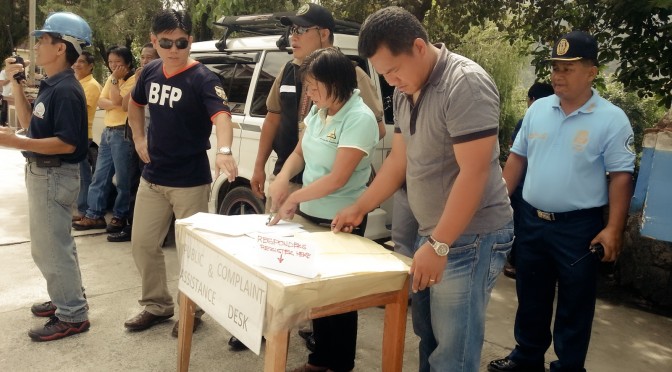 Bontoc, Mountain Province – As the country observes the National Disaster Consciousness Month this July, Governor Leonard G. Mayaen is grateful that Mountain Province has been spared from major calamities in the past several years.

“We are thankful to the Almighty that Mountain Province through the years has been saved from major calamities. This is as far as I can remember since I took over the governorship in 2010,” Mayaen stated.

The governor who is also the chair of the Provincial Disaster Risk Reduction and Management Council (PDRRMC) in a recent meeting, however, said that this should not diminish the interest and enthusiasm of the members of the council and other stakeholders to attend council meetings, discuss issues, plan, and implement the programs and activities in relation to disaster prevention and miti­gation, preparedness, rehabilitation and recovery, and other support programs.

“We are not praying for calamities to befall our province, but should it be unavoidable, at least we are ready,” the governor re­marked as he encouraged the participation of the members in the programs and activities of the council. “It is not only because it is our mandate, but it is because of our concern for our people and the province,” the governor added.

This month’s observance reminded many individuals of the past that brought to the province much pain and sorrow. Never­theless, the experience taught the people of Mountain Province to share blessings, love and compassion. Those times that the province was battered by natural calamities and other man- related disasters; resilience, unity, concern for others and services are traits that were displayed naturally by the Filipino spirit.

The most devastating disaster in recent history that occurred in Mountain Province was the landslide that struck Kayan, Tadian. The landslide resulted from the unabated strong rains of Typhoon Pepeng, leaving 40 people dead and six injured. Gravely hit was Sitio Bulala of Kayan East, Tadian. The landslide buried 35 people just when many households were having their dinner. The killer mud­slide happened at 6:45 in the evening of October 8, 2009, two days before the community was to celebrate its annual fiesta. With the power interruption, rescuers and volunteers turned nights to days to save lives of those buried by mudslide. With the communication system down, it was even harder to call for help from neighbouring provinces.

The continuous rains also caused landslides and washouts along roads, effectively isolating the province, hindering the entry of supplies and the transport of people needing special medical atten­tion outside the province.

Seven years have now passed since the Kayan tragedy. To­day, the mountainside where the sprawling community once found settlement remains uninhabited, with few trees and weeds that hide the scene of the tragedy. The homeless families were relocated to saf­er grounds, but residents living below the portion of the wiped-out village did not abandon their homes.

Also, last year, at least fifteen people, including comedi­an Arvin “Tado” Jimenez and two foreigners died while more than 30 others were injured as the Florida bus they were riding fell 500 meters down a ravine in Sitio Ab-ab in Barangay Bayyo, Bontoc at around 7:20 in the morning on February 7, 2014.

The bus with plate number TXT 872 came from Manila. Most of the passengers on the bus were tourists, while some were going to attend a women’s Christian conference in Bontoc.

The police investigation report revealed that the accident was caused by “loose brakes,” Also, the bus was not authorized to operate. Its engine and chassis number were different from the ones listed under the plate number’s Certificate of Registration filed at the Land Transportation Office (LTO).

Several lessons were learned from these tragedies. The Kayan tragedy underlines the need for more extensive disaster-preparedness as the province is prone to landslides and erosions. Ero­sion-mitigating measures have to be adopted, which includes the restoration of many lost forest covers. The Florida bus incident is a wake-up call, both to the motorists and the concerned agencies on the implementation of road safety measures and regulations.

Relative to this, Mayaen emphasized that the province is now focusing more on upholding disaster preparedness and aware­ness among stakeholders with the mission of establishing safe and resilient communities. The governor bared that the provincial government allocated P30, 292, 181.80 for the programs, projects and activities of the PDRRMC in its 2015 budget. This covers Prevention and Mitigation, Preparedness, Rehabilitation and Recovery, Support Programs, projects and Activities, and 30% Quick Response Fund. The budget includes trainings needed by the responders from the provincial level down to barangay level for disaster preparedness. Various activities of the council for this year were lined-up such as trainings, summits, drills and orientations for various audiences in­cluding schools and offices to make then ready and prepared during disasters.

As in the previous years, the provincial government will continue to procure disaster response and rescue equipment and emergency supplies. Also, various infrastructure projects were in­cluded in the budget for this year to further prevent and mitigate disaster risks and adverse climate change.

Meanwhile, on behalf of the PDRRMC, Pastor Jeff Saguibal a member of the council and representing the Mountain Province Christian Ministers Association (MPCMA), in his message before the employees of the provincial government and national govern­ment agencies during the Monday Flag Raising Program shared information on disaster prevention. Saguibal lauded the efforts of the government in conducting trainings needed by rescu­ers in emergency situation and he also suggested that educating the public on disaster preparedness be a continuous program.

Saguibal highlighted that disaster prevention is both the concern of the government and the public. Thus, the public should abide by the guidelines and recommendations of concerned agencies relative to disaster preparedness, prevention and mitigation.

He further encouraged everyone to be good stewards of the environment and to always pray to the Almighty. “God is in control of everything. He is loving, caring and a provider. He allows calamity for judgement because of wickedness and corruption. When judge­ments come upon the earth, the people of the world learn righteous­ness,” Saguibal mentioned.

As of this writing, report on damage due to the onslaught of Typhoon Egay in the province is still being consolidated.