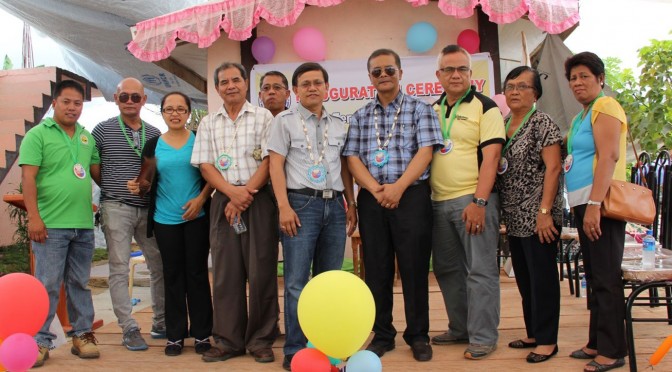 “From the love of the people of Mountain Province” – these inscriptions on the facade of the health center in Brgy. Ferreras and on the multipurpose unit in brgy. Limbuhan Daku sum up the province’s reason for extending help to the people of Eastern Visayas. It was done in the name of love- that universal feeling that time and again transcends geography, creed or color.

It could be recalled that nearly a year ago, the provincial government headed by Gov. Leonard G. Mayaen embarked on a mission to help typhoon-stricken areas in the Vizayas area. Coming together with haste and efficiency, the public and private sectors in the province were able to accrue enough monetary donations to finance the construction of infrastructure projects in Brgys. Ferreras in Marabut, Samar and Limbuhan Daku in Tanauan, Leyte.

Finally, on October 16-17, 2014, a 10-man team led by Gov. Mayaen himself visited Samar and Leyte to be part of the inauguration ceremony of the said projects. Brgy. Ferreras, through its chairman – Virgilio B. Cabero, hosted the said affair.

Donation certificates for a Multi-Purpose Building  for Brgy. Limbuhan Daku and a Barangay Health Center for Brgy. Ferreras were handed over by Gov. Mayaen to Brgy. Chairman Joel P. Logronio and Mr. Cabero, respectively.  Moreover, checks in the amount of 30,000.00 and 102,000.00 were also relinquished to the above-mentioned chairmen. The said amounts came from the pooled donations of the DepEd-Mountain Province family.

“Our gifts may seem small if compared to your other necessities; but we brought you these gifts with sincerity and love,” Gov. Mayaen said.

Meanwhile, Samar and Leyte officials have only praises and gratitude for the provincial initiative.  Marabut Mayor Percival A. Ortillo expressed his thanks for the Barangay Health Center. “Your gift has encouraged our health workers to be more active in providing health services to the barangay.”

Brgy. Ferreras Chairman Cabero noted that the project was the first of its kind in their area. “While others have coursed their donations through NGAs and NGOs, you made your presence and love felt by initiating the project yourself. While other benefactors have remained faceless, you gave us a chance to get to know you and your people better because of our interaction with you,” Cabero said in Filipino. He said that his constituents were encouraged to give and help in any way they could.

In his homily, Fr. Romeo Manzanaris of the Diocese of Calbayog, shared the story of a man who fell from a bridge and hurt himself really badly so he could not climb back to safety. According to the story, three men passed the poor man. The first tried to see what was wrong but remembered he was too busy to bother. The second said “Kaya mo yan” and walked on. The third man immediately went down to assist the injured man under the bridge.

Fr. Manzanaris likened the people of Mountain Province to the third man. While he stressed that “Yolanda is not a reason to beg for help”, Fr. Manzanaris also expressed his appreciation to the people who reached out their generous hands to Eastern Vizayas.

If love indeed begets love, the Montanyosa people just might have infected their Bisaya brothers and sisters with that value that pushes people to be altruistic- love.