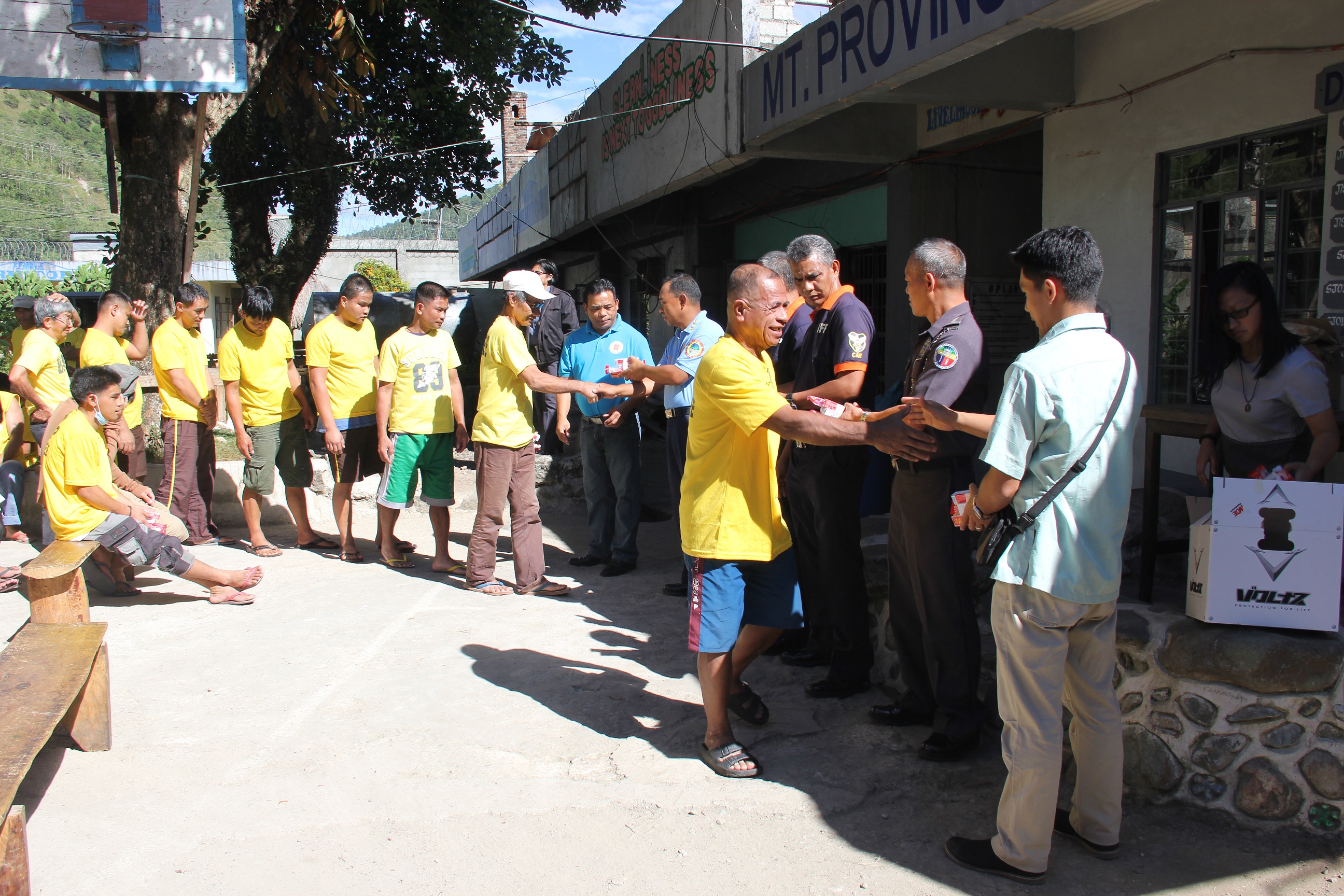 Bontoc, Mountain Province – Inmates detained at the Bilibid Provincial Jail here under the management of Bureau of Jail Management and Penology (BJMP) received hygiene kit from the Provincial Management and Coordinating Committee (PMCC) on November 3, 2015.
The gift –giving was an activity of the PMCC as part of the 24th National Correctional Consciousness Week scheduled in the last week of October with the theme “ Maayos na Pamamahala ng Piitan, Kaagapay ng Bayan Para sa Pagtaguyod at Pagtahak sa Tuwid na Daan.”
The hygiene kit given to the inmates was provided by the Department of Interior and Local Government (DILG). This includes detergent bar, toothpaste, toothbrush and bath soap.
In his message, PSSUPT Oliver A. Enmodias, the Provincial Director of Mountain Province Provincial Police Office (MPPPO) stressed faith to the Almighty. He reminded the inmates to always have faith in the Almighty and that God threat everyone equally.
On behalf of the BJMP-Provincial Jail, Jail Senior Inspector Edward F. Fataner, thanked the PMCC for the hygiene kit distributed to the inmate.
In response, an inmate thanked the PMCC for visiting them and for the gift they received, He remarked that the inspirational messages of the speakers are the greatest gift they received.
Other members of the PMCC present during the gift-giving are LGOO V Erwin Gerald Fegcan and LGOO II Trisha Dogup, both of the DILG- Provincial Office; Senior Fire Officer IV Esteban Alngangeo and SFO4 Pascual Takayeng, both of Bureau of Fire Protection (BFP), and Atty. Agosto Libang of the National Police Commission (NAPOLCOM) – Provincial Office.
J/SInsp Fataner shared that other line –up activities were conducted in the week long celebration for the inmates. These include an opening program, hanging of streamers, holy mass, display of livelihood products, and sports tournament such as basketball, volleyball and chess. Fataner added that those interested to order personalize frames to be made by the inmates may visit the provincial jail.


Also, a Family Day was scheduled for the inmates to bond with their family and friends in the provincial jail compound.

As of this writing, 46 inmates are detained at the provincial jail. Out of the total number, 18 are charge with rape, six are facing Violation of RA 7610 or the Special Protection of Children Against Child Abuse, Exploitation and Discrimination Act, five for Violation of RA 9165 or Comprehensive Dangerous Drugs Act, four for murder, two for frustrated murder, two for homicide, two for attempted robbery, two for arson, two are district prisoner, and one each for car napping, theft and other cases.
Meanwhile, least 16 inmates will cast their votes in the May 2016 national and local elections following the registration, reactivation and updating of data by the Commission on Elections (Comelec). However, the court has to grant and issue a court order for the detainees to vote.

Moreover, personnel of the BJMP- Provincial Jail will escort the inmates to cast their votes in a polling place at barangay Caluttit, Bontoc where they are registered and where the provincial jail is located.