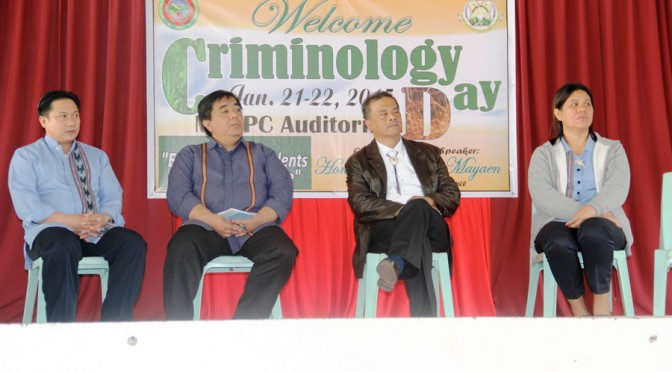 BONTOC- Governor Leonard G. Mayaen assured the full support of the Provincial Government of Mountain Province to the Mountain Province State Polytechnic College (MPSPC), the only state college in the province.

In his message before the students during the Criminology Day of the academe on January 21-22, 2014, he reiterated that for as long as MPSPC is there, the Provincial Government will also be there and will always be supportive of the college’s programs. “I stand as a father, an older brother, willing to walk with you and lead you”, he stressed.

He further inspired the students saying that the he came from a poor family, but it did not stop him to pursue his studies and achieve what he is now today. The governor also challenged the students that one among them would be standing on stage addressing the same crowd.

Meanwhile, MPSPC President Rexton F.Chakas recognized the support of the faculty and students to the programs of the college. With this, Chakas assured that the administration is doing its best to provide quality education to the students. He mentioned that the tuition fee the students pay, the college returned it to them thru services.

The college president also thanked the Provincial Government of Mountain Province for its all-out support to the academe.

It call be recalled that the Provincial Government donated crime laboratory equipment to the Criminology Department believing that these are needed to enhanced the skill of the students on proper gun handling, crime scene investigation and interrogation processing . Aside from these, the governor has also approved the allocation of P60, 000.00 as financial aid for the criminology students’ review in 2011.

Moreover, in 2014, the Provincial Government has expressed its support to the Extension Program of the academe to include the “Continuing Education for Security Guards”.

Also, most beneficiaries of the Mountain Province Student Financial Assistance Program (MPSFAP) are enrolled at MPSPC. This education assistance program has helped many students since its inception in 1993 and its institutionalization in 2010.For School Year 2014- 2015, 774 students benefitted from this program and were given their stipend of P3,000.00 per semester.

In addition, the College President was included as member of the Provincial School Board chaired by the governor. This is to further strengthen the partnership of the Provincial Government and the academe to address the concerns of the college.

Meanwhile, Dr. Joni L. Pagandiyan, the Chairperson of the Criminology Department gave more light to the theme of the activity, “Empowering Students towards Excellence”.  He encouraged the faculty to empower their students and excel in their own capabilities. “There are no other people who can empower our institution except us”, Pagandiyan remarked.