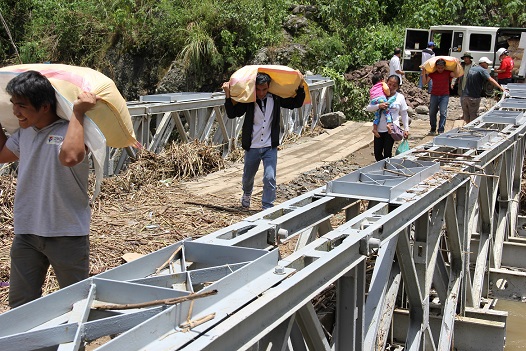 (Update) Bontoc, Mountain Province – The 24 evacuees from White Village, Barangay Caluttit in this municipality who evacuated their homes due to landslide at Teng-ab during the onslaught of Typhoon Ineng have returned home as the cyclone left the Philippine Area of Responsibility (PAR).

Aside from them, 32 families or 96 individuals in Barangay Gonogon who evacuated their homes as their houses were threatened by landslide are still staying with their relatives.

The respective Municipal Disaster Risk Reduction and Management Councils (MDRRMCs) also reported number of evacuees in their area. These include the 12 families or 100 individuals in Sabangan, 30 families or 115 people in Bauko, 100 families in Tadian, and 13 families in Barangay Bekigan, Sadanga.

Relative to this, the Department of Social Welfare and Development (DSWD), Red Cross- Mountain Province, provincial government of Mountain Province thru its Provincial Disaster Risk Reduction and Management Office (PDRRMO), and the Philippine Army distributed relief goodS to the evacuees in Barangay Gonogon and the other affected municipalities yesterday, August 24, 2015.

The relief goods for the evacuees in Sabangan, Bauko, and Tadian were hauled and carried across the Sabangan detour bridge as it is not passable to vehicles. The family food packs from the DSWD contain six kilos of NFA rice, four cans of sardines, 4 cans of Corned Beef, six pouches of BSU Veggie Noodles, and six sachets of Instant Coffee. The Red Cross- Mountain Province also gave biscuits, cookies, and hygiene kits.

It was earlier reported that the PDRRMO recorded two death and one missing caused by rain and wind induced by typhoon Ineng. 11-year old Ykir John Lee Mayon died, while his young brother Lhyker Mayon was injured when their house was covered by mudslide in Namatec, Sabangan at 4 0’clock in the morning of August 21, 2015. The injured victim and his mother, Lydia Mayon were now under the custody of Sabangan Municipal Social Welfare and Development Office.

The cadaver of Julius Bagni Gomisa alias Kaisu of Mabongtot, Lubugan, Kalinga who was drowned along the Chico River at 11:15 in the morning on August 22, 2015 was reportedly found at Suyang, Tabuk City. His remains was brought to Funeraria Carbonnel in San Juan, Tabuk City. His companion, Dumaguing Siping who was trapped at the center island of the Chico River is under the custody of a certain Mr.Pakeo living in the said area.

Meanwhile, Neil Kayangeo who was also drowned along the Chico River in Sitio Amchikangen is still missing.