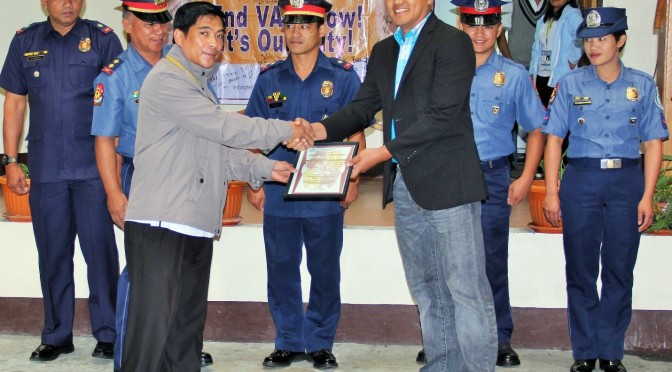 BONTOC – Inspired by his excellence in the delivery of service to the people and for his competence in the field of law enforcement, the Provincial Government of Mountain Province awarded a Certificate of Recognition to Police Chief Inspector (PCI) Byron F. Allatog on December 8, 2014 at the Provincial Capitol here.

PCI Allatog who hails from Bontoc, Mountain Province was one among the 2014 Country’s Outstanding Police Officers in Service (COPS) chosen by the Metrobank Foundation, Inc. (MBFI) in partnership with Rotary Club of New Manila East (RCNME) and PS Bank. He received a cash prize amounting to P400, 000 and a medallion courtesy of Metrobank Foundation.

In his message, PCI Allatog thanked the Provincial Government through the leadership of Governor Leonard G. Mayaen for the recognition that he received. The police officer also lauded the provincial government for recognizing and acknowledging those from Mountain Province who excel in their endeavours. PCI Allatog relayed that Mountain Province has produced many good, hardworking and efficient police officers and other individuals who excel in different areas be it in sports, politics and other career service oriented professions. With this, he encouraged the employees from the provincial government and national agencies present during the awarding to always render genuine public service.

Also, the police officer announced that a Search for Country’s Outstanding Police Officers in Service (COPS), Search for Outstanding Teachers (SOT) and Search for The Outstanding Philippine Soldiers (TOPS) will be conducted by MBFI next year. He shared that the selection is based on merit system and achievements of the nominees. With this, PCI Allatog encouraged police officers, teachers and soldiers from Mountain Province to join the search. “Let us inspire our children and relatives who are in service as police officers, teachers and soldier to join the search”, PCI Allatog remarked believing that there are many public  servants from Mountain Province  qualified in the said search.

Meanwhile, Provincial Administrator Johny V. Lausan who represented Governor Leonard G. Mayaen commended PCI Allatog for his achievements. Lausan said that indeed, PCI Allatog has inspired public servants to remain honest, true to their calling and perform their duty in the best of their abilities. He further said that police officers should be respected as they go beyond the call of their duty to protect and serve the public.

One thought on “Bontoc Son Lauded for His Excellence”