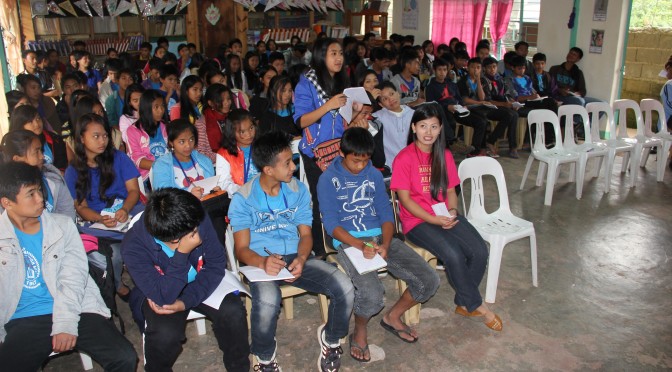 The symposium was attended by 110 students of Bagnen NHS comprising Grades 8, 9, and 10.

Prior to this, the school requested the Provincial Government of Mountain Province thru the Provincial Population Office in partnership with the Nursing Department of the Mountain Province State Polytechnic College (MPSPC) to conduct a symposium on Adolescent Reproductive Health Care to the students. The school’s initiative is because of their recognition of the importance of achieving healthy adolescent sexual development of their students. This involves the managing of the students of their physical, social, and emotional changes experienced during adolescence.

Provincial Population Officer Shirley Chiyawan presented the situation of the Filipino young people. This includes the increasing youth population, their lifestyle, preference to the use of different forms of media and gadgets, engagement in Non- Sexual Risk Behaviours, experience of physical violence as an aggressor or as victims, awareness and experience of harassment with the use of technology, engagement in sexual activities, teenage fertility. Chiyawan also showed to the participants the recorded increasing teenage pregnancy in Mountain Province from year 2011 to 2013. With this, she encouraged the participants to think and consider the risks involved on their health and their future in every decision they make.

Alfred Fomocao Jr., a college instructor of the Nursing Department in MPSPC focused his lecture on health, behaviours, and lifestyle which are the challenges that the youths are experiencing. Fomocao explained to the participants the physical growth and development, sexual differences, psychosocial development, psychosexual development, behavior, and lifestyle among adolescents.

He also lectured on teenage pregnancy which Cordillera Administrative Region (CAR) has the highest teenage pregnancy rate in the country. This was according to a 2013 Young Adult and Fertility Study conducted by the University of the Philippines Population Institute.

Fomocao ended his lecture with his encouragement to the participants to take care of their body as it is the only place they have to live in.

Meanwhile, on behalf of Bagnen NHS, John Libongen Jr. thanked the speakers for sharing the information that their students should know to become empowered youth in their school and in the community. // Alpine L. Killa