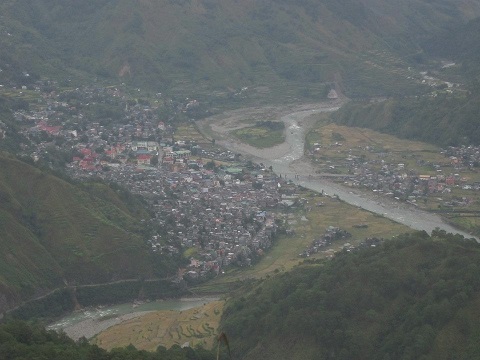 Bontoc, Mountain Province – Two separate trekking adventures featuring the historical and tourist destinations in the municipalities of Bontoc and Natonin will be part of the celebration of the 49th Mountain Province Founding Anniversary and 2016 Lang-ay Festival.

Provincial Tourism Officer in Charge Francis Degay cited that participants will pass through the following beautiful sceneries and historical landmarks:

Palikot Aso. It is where Igorot God Lumawig including his pet dog and rooster rested on a rock while taking a look at Sitio Lanao,Bontoc Ili. The rock has inscriptions of a hole where Lumawig placed his spear and where a rooster and dog laid down.

Kadchog Rice Terraces. A group of stone walled rice paddies that can be seen at At-ato. This manifests the engineering skills of the Bontok tribe.

Putot. A creek where the “ichiw” (a big snake) took a bath and while going up Mount Kamaliton totally blocked (petet) the creek’s flow of water. The ichiw was believed to have come from Mount Sachag. Accordingly, a pregnant woman was on her way to bring food to some workers building rice terraces through the spirit of “chinang-as” (bayanihan) at Adlem when the big snake swallowed her. The workers were too hungry and the woman has not yet arrived, thus, some Bontoc males went to meet her. At “Tufay” (named after a spear), they saw the ichiw and tried to strike it with spears but all these bounced. As they followed its path through the “chilis” (pressed grasses and shrubs), the males were shocked to see the “labfa” (woven basket), a clay pot full of meat and food scattered at Sitio Chata, a bad sign that something happened to the woman. With the suspicion that the woman was swallowed by the snake, they followed its path through At-ato-Chakso-Putot until Kamaliton.

Mount Kamaliton. This is where the ichiw was believed to have slept and was killed by the Bontoc men through the use of bolos and spears. They sliced its belly and found the woman dead. An old granary where a farmer store his harvest was constructed in this area.

Lamfagan, Walwalitan (sacred place) of Bontoc Ili. It is where some Bontoc women elders perform “walit”, a cultural belief and practice where they sacrifice a salted pork meat or chicken (depending on the gravity of illness) and pray for the bad spirit to abandon and let a sick relative to recover.

Tablaan Fawi. An Igorot hut where a Bontoc warrior named Sad-alan was allegedly killed by suspected warriors of other tribes while resting after he went to get “fika”- a family of bamboo used for weaving and tying palay. The roof of the “Fawi” was replaced with galvanized iron in the 80s. It is where elders of Bontoc Ili specifically Palpop-o Ato starts their “manerwap” or “mangiyag” – a cultural belief and practice that call for rain when there is no rain during the rainy period. The elders offer tobacco, “tapey” (rice wine) and “inasin” (salted meat), and chant prayers to Lumawig to bring forth rain to water the rice fields.

Pinaching. An “uma” (swidden) and evacuation area for some Bontoc Ili residents during World War II. Relics of some stone walls are still observed. This place was abandoned because of perceived presence of some “anitos” (spirit) that prevented them to connect an irrigation canal from a lake (Pusong) to their farms. An inch-size spring flows freely all year round that can be used for drinking.

Pusong (Forest Lake). In the olden times, some men attempted several times to dig an irrigation ditch from this lake for their farms at “Pinaching.” However, whenever they went back the following day, they discovered that their diggings were refilled with soil, as if nothing has been dug. Because of fear, they told the story to other residents which prompted them to desert the place.

Gadagad, Walwalitan of Alab. A saddle-like ridge where Alab folks butcher and offer a chicken or pig to an “anito” or “anitos” in favor of a sick relative. They chant prayers for the bad spirit to desert the sick and not to disturb her or him again. The place offers a scenic view of barangays Nacagang,Balugan, Payag-eo of Sagada, the Marlboro Country of Sagada, Bangnen of Bauko, and  Balili and Talubin of Bontoc.

Maalam-am. A part of a mountain range where only native ferns (alamam) robustly thrive. There were times that ferns grew as tall as a regular built man. Above is the rotunda, a cross trail to Talubin, Alab and Gonogon, all in Bontoc, and other barangays of Sabangan and Bauko, Mountain Province; Tinoc, Ifugao; and Buguias, Benguet.

Alab Petroglyph (Binot-boto). On the rock are inscriptions believed to have been made by the ancient Alab people. However, some believe that that these were the works of Alab males who went to gather firewood in the mountains. Some University of the Philippines (UP) anthropological researchers documented the place but up to this time there are no result of the study.

Matey-ak Rice Terraces. A few terraces built near the Alab Petroglyph. It showcases the industry of the Alab folks that even in remote place, they built rice terraces in order to survive.

Ganga Pigpen. It is located near the caves and was used for raising pigs by Alab evacuees during the World War II.

Ganga Stone House. It is a pyramid-like stone formation that serves as shelter to farmers and passerby. Sometime in 1988, a rebel gave birth to a healthy baby in the stone house.

Ganga Caves. A group of caves where some dead Alab males (about 100) were entombed after they were believed to have been killed by an ”anito”.The coffins used were made of thick pine trees.

Palali Rice Terraces. A group of rice terraces built by Alab folks. The stone walls showcases another engineering prowess of the old folks of Alab. This can be viewed at Alab Petroglyph.

Alab 1,000 Steps. When starting the trek in Alab, this is the thrilling upward trail of piled stones of about 500 meters in length and another 500 meters of cemented pathway. This shows the engineering ingenuity of the Alab folks. The route is used by hunters, farmers in going to tend to their farms, individuals who go to gather firewood and folks who perform cultural rituals.

Degay added that log cabins where trekkers may rest were constructed at Pusong, Maalam-am and Alab Petroglyph.

On April 4, 2016, grantees of the MPSFAP from the municipalities of Barlig, Natonin and Paracelis will be accompanied by some provincial government employees and interested mountain trekkers going to Mount Patikking in Banao, Natonin.

A 45-minute trek from the national road of Barangay Banao in Natonin, one may reach Mount Patikking where one can have a closer look of a rock shaped like an elephant’s head. Before reaching Mount Pattiking, trekkers will pass by the Abaca plantation which is becoming a potential industry in Natonin. Mountain trekkers who climbed Mount Pattiking shared that climbing the zenith of the mountain brings you closer to nature. One can have a 360 degrees view of the beauty of the Earth created by God. On top of Mount Pattiking, looking to North, one can have a perfect view of the rice terraces in Tonglayan and Apatan, and other barangays of Natonin; mountains of Ifugao to the East, mountains of Barlig and Sadanga to the West and Mount Amuyao to the South.

From Mount Patikking, one has to walk eight to ten minutes going down the Sayococna Picnic Grove. Natonin villagers describe it as a perfect family picnic ground particularly during summer.

According to Provincial Sports Development Officer Arnaldo Petten, Governor Leonard G. Mayaen has been very supportive of the trekking activities to be participated in by the grantees believing that they should know about the province in order to appreciate the different tourism destinations and historical landmarks which they will be proud to share their trekking experiences at the same time promote the places they will visit. Petten added that this is also a way of encouraging the youth to be partner advocates in the preservation of nature and promotion of eco-tourism in the province. Aside from this, hiking is a way to promote healthy lifestyle among the youths.

Meanwhile, the organizers reminded those who will participate in the trekking to wear proper trekking clothing and gears, bring their own drinking water and food, first aid kit and other necessities needed during the trek.