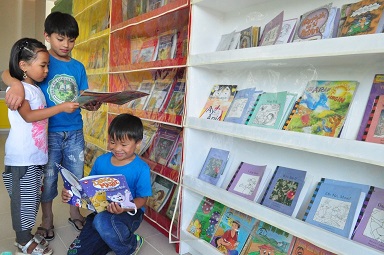 This is a joint project of Hedcor Inc., a wholly-owned subsidiary of Aboitiz Power Corporation, in partnership with Aboitiz Foundation and Aklat, Gabay, Aruga tungosa Pag-angat at Pag-asa (AGAPP) Foundation in support of the government’s K+12 education program.

The P1.7 million-worth building project now benefits 20 kindergarten pupils of Pingad and Bao-angan who currently enjoy their new classroom facility. It consists of two well-furnished classrooms painted with vibrant colors of red, green and yellow and a comfort room. It is also equipped with tables, chairs, cabinets, books and educational toys.

Pingad –Bao-angan Elementary School Head Jess B. Chumaran expressed the gratitude of the school to all the key players who contributed in the realization of the project. “With this beautiful building, I believe that our children will enjoy coming to school every day,” he added.

Sabangan Hedcor Operations Manager Berny Zamoranos said that it has always been Hedcor’s mindset that it can do well by doing good, always making good term decisions that balances the interest of people, planet and profit. “This is an investment to the education of our children. I hope that this building will help our school’s K+12 journey. May this school inspire our children to dream beyond limits while upholding good values as they grow up, “he stressed.

In her brief message, Aboitiz Foundation rep Jowelle Ann Cruz also shared that in support of DepEd’s K+12 program, the Aboitiz Better World Schools program continues to develop special science elementary schools and technical-vocational high schools nationwide. “We have built science laboratories and tech-voc workshops and provided teachers’ skills training in the 34 schools where this program is now being implemented,” she said.

In response, Governor Leonard G. Mayaen expressed the gratitude of the provincial officials and the people of Mountain Province to Hedcor for the latter’s projects.  He stated that the hydropower plant is the start of more projects from Hedcor and that he is confident that this will continue to benefit the host community. The governor added that such is a fruitful partnership between the business sector and the local government for the development of the province which is worth emulating.

He also assured the support of the provincial government to Hedcor in its proposed mini-hydro projects in Bontoc and Sadanga, having Sabangan Hydropower plant as the living example which the other municipalities can look up to. He urged the officials and people of Sabangan to take the lead in disseminating the advantages that the hydro power project has brought them and to help correct the misconceptions as regards the project.

The governor also shared that part of the real property tax remitted by Hedcor-Sabangan, Inc. to the provincial government will be allocated for the information dissemination and education of concerned people of Bontoc and Sadanga, especially in the prospective host communities . Moreover, he assured the DepEd officials that the collected Special Education Fund from Hedcor shall likewise be used to finance DepEd’s academic and non-academic activities.

Virginia A. Batan, the Chief Education Supervisor of the School Governance and Operation Division who represented DepEd-Mountain Province Schools Division Superintendent Gloria B. Buya-ao said that the division is very grateful to Hedcor and all the key players in bringing the educational facilities closed to the community. The division is also hopeful that more Silid Pangarap conducive for learners will be constructed in the province. “The building we received looks comfortable. The ambiance looks so comforting that no child can resist to enter,” she added.

Sabangan Mayor Donato L. Danglose also thanked everyone who shared their resources and time in the construction of the “Silid Pangarap.”

Meanwhile, it was learned that another “Silid Pangarap” will soon be constructed in Monamon, Bauko.