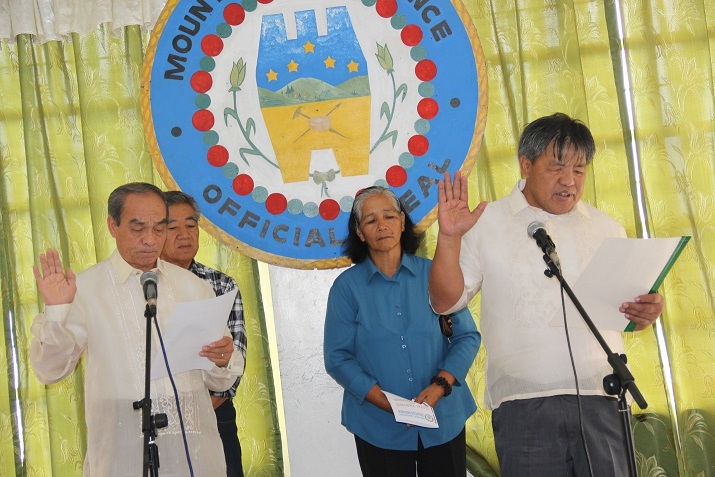 By Alfred Macalling and Angel B. Baybay

Lacwasan and Board Member Francis Tauli, who was elevated as the vice-governor – were sworn in by Judge Joseph Patnaan, presiding judge of the 1st Judicial Region Branch 35 on April 5, 2015 at the Sangguniang Panlalawigan Hall here.

Lacwasan should have sworn into office the day the late governor was declared dead but he deferred in keeping with the Igorot tradition for the respect of the dead. The newly sworn governor shall serve the unexpired term of Mayaen until noon of June 30, 2016.

In his short message before his colleagues, provincial officials and employees, some municipal officials and friends, Lacwasan assured that he will continue the legacy of his predecessor. He said that he and late Governor Mayaen have something in common, and that they are supportive to the concerns and benefits of employees.

“With the cooperation of the members of the Sangguniang Panlalawigan, I will try my best to ensure the realization of his dreams for the employees. We will make every effort to implement the salary standardization law and ensure the continuance of other benefits for our provincial work force,” Lacwasan emphasized.

“Current positions and designations in the provincial government shall be placed under status quo, likewise, the operations and transactions of provincial offices shall continue as usual,” he added.

He earned a Bachelor of Arts in Economics diploma from the University of Manila and finished a diploma course in Local Governance and Development at the Development Academy of the Philippines.

Meanwhile, vice governor Tauli, a native of Sagada, is a licensed geodetic engineer and a civil engineering course graduate. Tauli once worked as an engineering assistant at the Sagada Municipal government before entering politics in 1998 where he was elected as a municipal councilor for two successive terms. He won the vice mayorship in 2004. A first termer at the Sangguniang  Panlalawigan,  he got the highest percentage votes in the 2013 elections among the eight elected members of the provincial board.

Lacwasan and Tauli come from entrenched political clans. The late Bonifacio Lacwasan, Sr. was a former member of the provincial board and later as deputy governor of the sub-province of Bontoc during the old Mountain Province days. George Tauli, Sr., father of the newly sworn vice governor, was a long time Barangay captain in Sagada and, for three times, was the municipal ABC president.